Amy Meadows in Features , About Atlanta
December 7, 2020 8 mins to read

Delta Air Lines. The Coca-Cola Company. The Home Depot. Corporate names like these have been synonymous with the City of Atlanta and the surrounding metro area for decades. In recent years, more renowned companies have joined them. Porsche Cars North America. Mercedes-Benz. NCR. And in 2020, even in the midst of some of the most challenging times this country has ever faced, the list of companies that are actively choosing to call Atlanta home continued to grow exponentially. Here, we look at a handful of the industry giants and burgeoning organizations that, within the last several months alone, announced major moves that will see them either relocate or expand to the metro market.

In May 2020, Midtown Atlanta was abuzz with the news that Microsoft selected the area for its newest office development. The software titan had announced that it would be opening a new client-facing workplace that would focus on artificial intelligence and cloud services, and it had chosen a new development in West Midtown, called Atlantic Yards, for the office. Slated to open in summer of 2021, the new Microsoft facility will feature 523,000 square feet of space encompassing the entirety of the two-building development. The move will bring 1,500 jobs to Atlanta over the course of five years.

“Top-ranked universities, global industry partners and a thriving local community make Atlanta a global tech center that supports Microsoft’s mission of empowering our customers,” says Mike Lawings, Regional Director of Real Estate & Facilities Americas, Microsoft. “The Atlantic Yards expansion reflects a commitment to our workforce in Atlanta and is an investment that helps us further establish our presence in that region.”

The office itself, which will be located just blocks from the Georgia Tech campus, will be an industrial-inspired one that will reflect local elements and incorporate the surrounding outdoor areas into its work and community spaces. A courtyard, rooftop gardens, private balconies and open-air terraces, as well as a new retail space, are all part of the plan for the Atlantic Yards office. Microsoft, which currently occupies WeWork co-working space on Peachtree Street in Midtown and also boasts offices in Buckhead and Alpharetta, is dedicated to ensuring that the new space truly fits with the culture of Atlanta and has reached out to the community, employees and suppliers to gather their perspectives about what Atlanta means to them; their input will be infused into the design of the space. “We don’t want employees to merely fit into the space—we want them to feel like they belong,” Lawings notes.

That level of collaboration—with both employees and the city itself—is significant for Microsoft, as it looks forward to becoming an integral member of the Atlanta business community and helping burgeoning West Midtown become a truly viable locale for all types of companies. “At Microsoft, we understand the positive impact that we can bring as an active partner when we are fully engaged with local businesses and the surrounding communities in which we operate,” Lawings concludes. “From committing to the use of minority suppliers in our build out to daily operations to community program management to partnering with the many historic universities in the area, we are excited about the opportunities ahead to work hand-in-hand with local organizations and community groups in Atlanta, to share technology and create training programs that ensure both the site and the city thrive.” 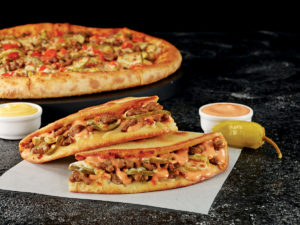 This past fall, Papa John’s became one of the many companies to choose Atlanta as its new home. The company currently is exploring locations throughout metro Atlanta for a new global headquarters, which will handle menu innovation; marketing; customer experience; human resources; diversity, equity and inclusion; communications; operations excellence and development functions. It’s all part of a broad reorganization plan for the popular pizza chain.

“, we set a new strategic direction for Papa John’s,” explains Marvin Boakye, Chief People and Diversity Officer. “Shortly after, we began to assess our corporate organization and how we can best support our restaurants and the brand’s long-term growth. We’re thrilled to open a headquarters office in Atlanta, our largest corporate-owned restaurant market, where there’s such a deep talent pool and world-class airport connecting us to domestic and international markets.”

While Papa John’s IT, supply chain and legal teams will remain in the company’s Louisville, Kentucky, headquarters, and its international operations will continue to operate out of London, the new Atlanta-based headquarters will help transform the company into “a brand and culture that can effectively and efficiently deliver on its purpose, values and strategic business priorities,” Boakye says. It also will bring 200 jobs to the area when it opens by the summer of 2021. Until then, the company is spending time in Atlanta preparing for the transition and beginning the recruitment process for the new positions that will begin to open in the coming months.

Ultimately, Boakye says, “We are focused on investing in capabilities for future innovation and global growth, improving efficiencies and better aligning our organization around the strategies that are driving our near- and long-term successes.” The move to Atlanta is designed to help set the company up for success over the next five to 10 years of business, during which Papa John’s expects to see significant growth of the brand. He adds, “Metro Atlanta is an energetic and diverse region. We’re thrilled to open a headquarters office in the Atlanta region and look forward to growing our existing teams and being involved in the local community.” 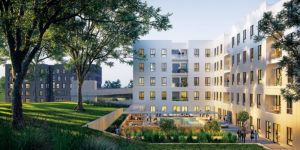 Just over a year ago, Common Living, a New York-based apartment development company, began vetting six different cities in which to potentially expand. Several were eliminated from the list right away, as they weren’t close enough to the company’s major residential hubs, which include New York City, Washington DC and South Florida. Atlanta soon rose to the top of the list and emerged as the clear winner for the location of the company’s second headquarters.

“Atlanta is the perfect place for Common’s new HQ, particularly because of the talented, creative and tech-infused workforce in the city,” says Sara Martizelli, Vice President of People Operations. “We chose Atlanta because of the high quality of life we could give to our employees and the strong local community that we wanted to grow with as a brand. We also have a sizeable residential real estate pipeline in Atlanta, so we’re going to continuously increase both our residents and employees in this great city.”

Common Living also saw Atlanta as a city that people not only love to live in, but also that new people are excited to move to. It was a particularly important distinction for the company, which is growing quickly. It currently has nearly 4,000 open units across its portfolio in 11 cities; the Atlanta operation is slated to serve as a hub that will help the organization add more than 15,000 units in 22 cities worldwide. And with Common’s recent closing of $50 million in a Series D funding round, the company is looking to “scale our business thoughtfully and build a mission-driven passionate workforce,” Martizelli notes. “Opening a new headquarters is imperative to growing our team, and although it’s always a challenge to open a completely new headquarters, we are beyond excited by the opportunity in front of us.”

With that in mind, the company selected downtown Atlanta for its new office, which ultimately will house 100 employees. There will be a wide variety of roles covered in this second headquarters, from operations leads and leasing specialists to real estate portfolio managers and architectural designers. Martizelli reveals that the company also is doubling down on Common’s in-house technology and looking to expand its software engineering team in Atlanta. “Technology is really what differentiates Common’s business from other property managers, particularly when it comes to building performance and resident happiness. So I am really excited to build upon this core tech team in Atlanta,” she continues. “Overall, there’s something for anyone who wants to get involved in making the future of real estate brighter.”

Common initially moved 20 employees to the metro area and will expand that number when the downtown office is fully operational. In the meantime, the company is hiring fast and looking for people with innovative points of view. It also is working to become an integral part of the local community. As Martizelli concludes, “We want to make Atlanta part of the fabric of Common’s company culture. We believe Common’s competitive advantage is our team, and we think Atlanta is the best place to grow it.”

For more information and to see job openings, visit:

Throughout the second half of 2020, the State of Georgia and Governor Brian Kemp announced a number of big name company relocations to Atlanta. Here are two additional organizations that are about to make a splash in the metro area with new offices and job opportunities for local residents.

Milletech Systems Inc.: In June 2020, the state announced that Milletech, a woman-owned Georgia State Minority Certified business, which offers end-to-end software, enterprise and emerging technology business solutions to clients across North America, would move its offshore operations to Atlanta. The new office for this initiative will be located downtown and create 465 jobs in Fulton County. The company, which is based in Alpharetta, was drawn to the area’s outstanding universities, training programs and technology talent pool. The new office will see employees work in emerging cloud technologies and software development.  milletechinc.com

Zillow Group: One of the largest online real estate brands, Zillow is used by millions of people every year to find homes for sale across the country. In August, the company named the Atlanta area as its new Southeastern hub. It will open an office in Dunwoody Perimeter Market in DeKalb County, bringing more than 200 jobs to the area. Its decision focused a great deal on Atlanta’s thriving tech sector, which will be a great asset to the company as it continues to grow its mobile and online real estate brands. zillow.com/careers

How to Build a Community in Atlanta

Whether on the lookout to practice your favorite hobby, network with industry professionals or get to know your neighbors, Meetup is a fantastic resource to build a community in your new home. read more