More than 83.1 million Millennials live in the United States, and more and more are choosing Atlanta as word spreads that the city is an attractive place to live. Niche.com, a website that ranks cities and neighborhoods,  has consistently ranked Atlanta in its top 25 "Best Cities for Millennials," reporting its calculations were based on “the number of millennial residents, job opportunities, and access to bars, restaurants, and affordable housing."

As the city continues to grow, so does its reputation in a variety of professions, garnering nicknames like “Hollywood of the South” and “The Southeast Center of Innovation,” and Millennials — defined as that generational group of people who reached adulthood near 2000 — will continue to seek it out as a great new place to call home.

KNOWAtlanta spoke with three Millennials who recently moved here and now live in different communities throughout metro Atlanta. They shared with us what brought them here, what they love about their communities and how long they plan to stick around. 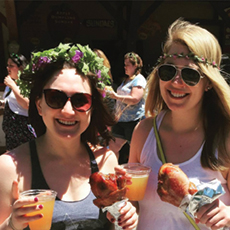 When did you move to Atlanta and why?

I moved to Atlanta three years ago from Spokane, Washington, where I grew up. The company I was working for at the time was offering transfer opportunities and I jumped at the chance for a change of scenery.

What are you doing professionally? Are you optimistic about your professional future with the job market in Atlanta?

I am a construction manager for a food and beverage franchise. Atlanta has so many great opportunities and amazing companies and I am really excited for what the future holds.

What do you like about living in Atlanta? Why do you think it’s a great place for Millennials to live?

I love that there’s a great mix of activities here. I love trying new restaurants and going shopping, and Atlanta offers so many opportunities to get outside, from the great hiking trails to shooting the ’Hooch (tubing, kayaking and canoeing experiences on the Chattahoochee River. Never a dull moment!

What’s your favorite part about the neighborhood/area of Atlanta you live in? How did you choose that area?

I live in Dunwoody and I love that it’s outside of the hustle and bustle of the city but close to my work. It’s great on weekends, too, since I’m just a quick Uber ride to Midtown, where my friends and I usually like to go out.

What are some of your favorite things to do in Atlanta?

I love hiking at the Chattahoochee Nature Preserve and going to the Atlanta BeltLine to explore the area and try new restaurants.

Do you plan to stay in Atlanta long-term?

Atlanta is home now. Everyone here is so friendly and I can fly direct to pretty much anywhere from the airport. There is so much to do I can’t imagine ever leaving!

What’s your best advice for a Millennial who has recently moved to Atlanta?

Get involved. There are so many groups and alumni clubs and meet-ups that you offer great opportunities to meet all kinds of people. 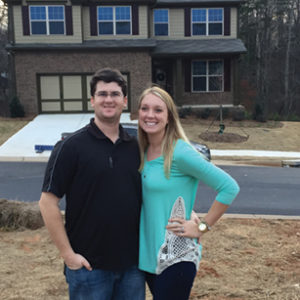 When did you move to metro Atlanta and why?

My wife and I both grew up in Atlanta, her in Woodstock and Marietta, and myself in Alpharetta. We both left Atlanta for college and moved away from the city after graduating. After living in other states for about five years, we decided it was time to move back home and did so in January. We had found out that we were going to have a baby girl and wanted to be closer to our families.

Atlanta has always been “home” for both of us, so we were very excited about coming back. Being close to our friends and family is something that we absolutely love. Being in Atlanta also provides so many different opportunities for things to do and places to go. We can go hike Kennesaw Mountain, go to an Atlanta Braves game and then choose from about 5,000 different places to eat all in the same day.

Where do you work?

I am a consultant for a company called LogistiPoint Consulting. I travel for work and am on the road three to four days every week.

Since you recently bought a home in a Lennar neighborhood, what led to your decision on where to move in Atlanta?

We knew we wanted to live somewhere north of the Interstate 285 Perimeter and wanted to have a house that we could raise a family in. We initially looked in the Alpharetta area at houses that were maybe 10-20 years old. We discovered that for the same price we could get a brand new house in Woodstock, so we decided on that. As I said, I travel for work so we were not limited to a certain area within a close proximity to work. This made it easier because we could consider a wide range of areas in metro Atlanta.

What do you like most about your new neighborhood?

Our neighborhood is a new neighborhood, and parts of it are still being built. It seems to be attracting a lot of people that are at similar points in their lives as we are. We are both in our late 20s and just starting a family, and there are a lot of younger families moving in that have small kids or will in the near future. We also love how close we are to downtown Woodstock, only about a five-minute drive away. There’s plenty of food and shopping there, and there always seems to be something fun going on during the weekends.

Do you plan to stay in Atlanta long-term? If so, why?

Our plan is to raise our children here and have them call Atlanta home as well. It’s a great city that I can only see getting better, and a wonderful place to grow up.

For individuals and families contemplating a move to Atlanta, what is your best advice?

Be open to everywhere. Atlanta has so many different parts, each with their own perks, so don’t limit your search to just the part of town you think you want to be in. I had originally not even wanted to look in Woodstock until my wife convinced me to at least try it. And now there is no place I would rather be. 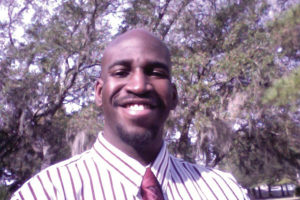 When did you move to metro Atlanta and why?

I have been in Atlanta for about six months now. I moved at the end of February. Both professional and personal reasons drew me here. I am working right now at General Assembly and for the Atlanta Braves, but I’m looking for a full-time opportunity. After probably a year or so of looking for jobs in Orlando, Florida, I just decided now was the time to make the move.

Where are you from originally?

I graduated from Oakland University in Rochester, Michigan, because I’m originally from Detroit. I graduated with my degree in marketing and worked for a number of years in nonprofit marketing, public relations and public affairs. I was in a good job with the company but I decided that was not what I wanted to do anymore, so I decided to go back to school. I attended Full Sail University in Orlando to pursue more of a media arts and entertainment business background, earning my master’s. I got involved a lot with the independent music community in Orlando after graduating and later worked for Full Sail’s information technology department for five years. I had come to a crossroads; I saw that Atlanta wasn’t too far away, on top of the fact that it’s always been an entertainment hub, and it’s a growing tech hub as well. I figured I could combine that with my communications background so I decided to make the move to the Atlanta area.

What’s your favorite part about living in Atlanta?

Where do you live now and what do you like about it?

I live in Fayetteville with family and my goal is to move a little bit closer to the city, hopefully near East Atlanta. I like that there’s so much to do there. I have a friend that’s in apartment management there and she lives in that area, and one of the things that she did with me and a few other friends that recently moved here was just take us on a tour around the area. I also like that it has a similar vibe to Little Five Points but a little more mature, in a sense. Everything is close and you can hop on MARTA if you need to get elsewhere in the city, but you have lots of little shops, coffee shops, nightspots, bookstores, you name it. That’s really important to me.

Do you hope to stay in Atlanta long-term?

Yes, definitely. Atlanta is my home for at least the next two to three years.

Are you optimistic about finding a full-time career in Atlanta?

I am. I do some writing and journalism on the side, which is something else I am looking to pursue, whether it’s blog or magazine writing. I’d also like to start my own company. Those are the things I am focused on right now.

What is your best advice for someone considering a move to Atlanta?

I think the biggest thing is to look into what you want to be involved in when you get here; there are so many nonprofit, civic and volunteer organizations to join. For Millennials, I think in Atlanta you’re able to have a good balance of being involved in things and be apart of something but also enjoy your time, whether that happens at work or away from work.

This article was updated to a more recent version on Jan. 18, 2018 by Claire Turner.